Konstantin Zatulin, a member of Russia‘s parliament who was in Tshkhinvali to observe the referendum, said: “We need to move towards recognising reality.”

“South Ossetia is a reality, like Transdnestr, Abkhazia and Nagorny Karabakh.” He was referring to other disputed former Soviet regions.

Tbilisi, the Georgian capital, has repeatedly rejected South Ossetia’s calls for independence and accused Moscow of trying to annex South Ossetia and Abkhazia, another breakaway region.

Jaap de Hoop Scheffer, the secretary-general of the Nato military alliance, said “such actions serve no purpose other than to exacerbate tensions in the South Caucasus region”.

No independent international monitors observed the vote, which has been widely criticised.

The head of the 46-nation Council of Europe called the referendum “unnecessary, unhelpful and unfair”.

“The results will not be recognised by the international community, the vote did nothing to bring forward the search for a peaceful political solution,” Terry Davis, the secretary general of the human rights organisation, said.

The Organisation for Security and Co-operation in Europe called it “counterproductive”.

Election officials said more than 90 per cent of the 55,000 eligible voters turned out for the the second vote on the province’s independence since 1992.

South Ossetia declared independence after a war with Georgian forces in 1991-1992 that killed more than 1,000 people and displaced tens of thousands.

Ossetia to vote on independence

South Ossetia has announced it is to hold a referendum on independence from Georgia. 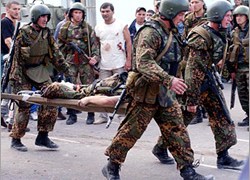 Authorities have shut down gambling in the Russian region of North Ossetia after three bombs exploded at all-night slot-machine arcades in the provincial capital, killing two people and injuring more than 20 others.