Earlier on Monday, at least 14 people were killed in Baghdad, including 10 in a bombing on a bus.

A bomber blew himself up as a minibus bus passed a major intersection in the predominantly Shia neighbourhood of Shaab in northeast Baghdad.

Twelve other people were wounded in the blast, a police source said.

Earlier still, four people were killed in a series of shootings around Baghdad while a bomb exploded on the outskirts of the heavily fortified Green Zone, the seat of Iraq‘s government.

In Diyala, the province northeast of Baghdad, Assim Mahmoud Abbas, a council member, was killed in a drive-by shooting, council leader Ibrahim Bajilan said. Another member was wounded in the attack on their car in Waziriya.

A brigadier-general in Iraq‘s traffic police was shot dead, along with his driver, as he was travelling to work in central Baghdad, police said.

Muhammed Salim, a police major from the central Karrada district of Baghdad was abducted and later found dead, an Interior Ministry source said.

Gunmen stormed the house of another police major, Maher Moussa, commander of the Rashad police station in eastern Baghdad, and took him away, the same source said. His fate is unknown.

Gunmen also opened fire on the car carrying a presidential council adviser as it drove through Mansur in western Baghdad, killing two bodyguards.

A car bomb exploded in a garage used by defence ministry employees outside the Green Zone, destroying 13 cars but wounding only one person.

Among others killed on Monday was Mohammed al-Ban, a cameraman for Iraq‘s independent Al-Sharqiyah satellite television, who was killed leaving his Mosul home on Monday morning. His wife was wounded.

Al-Ban is the second journalist from the channel killed in recent weeks. Anchorwoman Leqaa Abdul Razzaq was shot late last month as she was travelling in south Baghdad‘s Dura district.

At least 89 journalists have been killed in Iraq since March 2003, according to the Associated Press. Thirty-five people employed by media organisations, including drivers, interpreters and guards, have also died.

Four male primary school teachers were killed while driving in their vehicle in the oil city of Kirkuk in the north. They were killed by gunmen riding in another vehicle, police said.

The US military announced that eight “terrorists” had been killed and 41 suspects detained in a series of raids around Baghdad.

The eight were killed after refusing to surrender and attempting to escape from a building that had been raided.

“The detainees are believed to have close ties with members of the al-Qaeda in Iraq group as well as links to foreign fighter facilitators,” the military said.

It said the group had been active “with local vehicle-borne improvised explosive devices [car bombs] and supporting the foreign fighter network”. 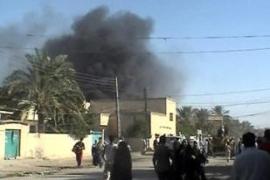 More than 135 people have been killed as fighting between rival sects continues.

A bomber has blown himself up outside a police recruiting centre in Baghdad, killing at least 35 people and wounding 56 others. 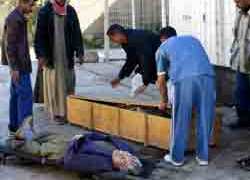 A convoy of minibuses has been ambushed on the dangerous highway south of Baghdad, killing 10 passengers. More than 50 others were reportedly kidnapped in the incident.