“Our message is loud and clear to those who take unfriendly positions against Arabs.”

Arab banks have not transferred funds to the Hamas-run Palestinian Authority amid concerns of incurring US-led penalties.

Kuwait’s foreign minister said his country would send $30 million to the Palestinians, and Bahrain said the Arab countries would begin contacting international financial institutions to get the money transferred.

Mohammed Awad, secretary-general of the Palestinian cabinet, said at least $52 million would be ready for immediate transfer and would go to paying salaries.

Awad said: “Most banks follow their governments. They must remove the blockade.”

It was not immediately clear if Arab banks would immediately begin transactions on Monday after the decision or if sanctions would be imposed if they did.

Arab foreign ministers also called for a peace conference to resolve the Israeli-Palestinian conflict “according to international resolutions and the principal of ‘land for peace’.”

The Arab League wants Hamas to endorse a 2002 initiative that calls for peace in exchange for land seized by Israel in the 1967 Middle East war – the West Bank, the Gaza Strip and east Jerusalem.

Mark Regev, a spokesman for Israel’s foreign ministry, said he was not aware of the conference proposal but he said Hamas could not be a party to talks with Israel unless it met the international community’s stipulations.

The US, Europe and Israel demand that Hamas recognise Israel, renounce violence and abide by existing agreements between Israel and Palestinians.

The Arab League ministers also decided to ask the UN General Assembly to hold a special session to discuss the situation in the Palestinian territories.

The draft UN resolution vetoed by the US would have condemned a recent Israeli offensive in Gaza that has killed more 50 people and also demanded that Israeli troops pull out of the territory.

The resolution, sponsored by the Gulf state of Qatar, also criticised the Israeli tank shelling of a home in Beit Hanoun on Wednesday in which seven children and four women were killed as they slept.

John Bolton, US ambassador to the UN, said the Arab-backed resolution was “biased against Israel and politically motivated”.

The offensive was part of a larger military operation carried out by Israel in June after Palestinian fighters captured an Israeli soldier and killed two others in a cross-border raid. 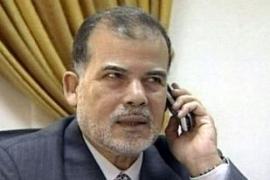 Fatah and Hamas ‘close to deal’

Mahmoud Abbas, the Palestinian president and Fatah leader, has said he expects a unity government to be formed between Fatah and Hamas this month.

Haniya will resign if sanctions are lifted

Ismail Haniya, the Hamas leader, has said that he would step down as Palestinian prime minister if it would persuade the West to lift economic sanctions.