Israeli fighter jets continued to pummel the Gaza Strip in the early hours of Wednesday, flattening residential buildings and killing at least four Palestinians, including a journalist.

The Israeli military dropped 122 bombs on Gaza in 25 minutes on Tuesday night, the Times of Israel reported.

At least 219 Palestinians, including 63 children, have been killed in Gaza since the latest violence flared on May 10. About 1,500 Palestinians have been wounded.

Twelve people in Israel have died, including two children, while at least 300 Israelis have been wounded.

Members of the al-Astal family, whose house was among the seven destroyed overnight, said a warning missile struck the building five minutes before its bombardment.

Fifty schools in Gaza have been damaged by Israeli air raids over the past week, according to Save the Children, affecting a total of 41,897 children.

Three further schools have been damaged in Israel by rockets fired from Gaza, according to UNICEF. 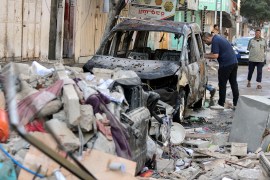 Israeli PM defies call by US President Joe Biden for ‘a significant de-escalation in Gaza today on the path to a truce’. 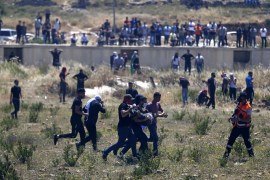 Dozens wounded on Tuesday during protests amid general strike throughout the occupied West Bank. 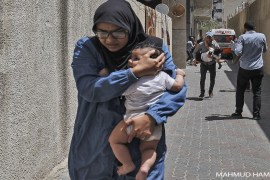 More than 213 Palestinians killed, hospitals overwhelmed and running low on medical supplies and thousands are displaced