A huge blaze that ripped through a sprawling Rohingya refugee camp in Bangladesh has forced at least 50,000 people to flee and left seven people dead, officials and aid workers said, in the biggest fire to hit the shanty settlement to date.

Nearly one million of the persecuted Muslim minority from Myanmar – many of whom fled a military crackdown in their homeland in 2017 – live in cramped and squalid conditions at the camps in the southeastern Cox’s Bazar district.

It is the third fire to hit the camps in four days.

Officials said the latest blaze appeared to have started on Monday in one of the 34 camps – which span about 8,000 acres (3,237 hectares) of land – before spreading to three other camps, with refugees fleeing the shanties with whatever belongings they could carry.

Thick columns of smoke could be seen billowing from blazing shanties in video shared on social media, as hundreds of firefighters and aid workers battled the flames and pulled refugees to safety.

Firefighters brought the blaze under control around midnight, with the Refugees International saying at least 50,000 people fled their shanties as the fire reduced thousands of shelters made of tarp and bamboo to ashes.

The government’s refugee office and police, however, had yet to confirm any deaths.

“It was the biggest fire since the influx of Rohingya in August 2017. Some 1,500-2,000 shanties were completely gutted,” the government’s deputy chief refugee commissioner Shamsud Douza, told AFP.

Douza said food had been delivered to the displaced refugees and aid workers were trying provide all necessary humanitarian support.

Gazi Salahuddin, a police inspector, said the “fire displaced about 50,000 people who took refuge in the homes of their relatives in other camps”. 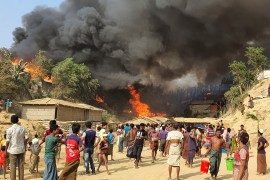 Blaze at Balukhali camp in Cox’s Bazar destroys hundreds of tents, as well as health centres and other facilities. 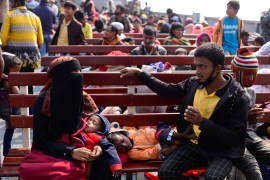 Delegation on three-day visit to Bhasan Char island in Bay of Bengal where Bangladesh moved more than 13,000 refugees. 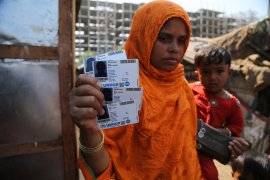