The traditional leader of South Africa’s 12 million Zulu people, King Goodwill Zwelithini, has been laid to rest in a private ceremony on Thursday.

Zwelithini, 72, died from health problems related to diabetes last Friday and he was buried in a traditional ceremony known as “ukutshalwa kweNkosi”, which is attended by only senior men of the royal family, many wearing leopard skins and colourful Zulu regalia.

Reigning for more than 50 years, Zwelithini was the longest-serving monarch of the Zulu nation, the largest ethnic group of South Africa’s 60 million people. The KwaZulu-Natal province is where most of the country’s Zulus live.

Historically, the Zulu nation gave early resistance to British colonialism under the leadership of King Shaka Zulu from 1816 to 1828.

Zwelithini was a proponent of traditional Zulu customs and the most influential of South African traditional leaders, who do not hold political office but have considerable influence, especially among South Africa’s rural people. He is credited with speaking openly to encourage public education to control the HIV/AIDS epidemic that was sweeping through South Africa in the 1980s and 90s.

After Zwelithini’s burial, President Cyril Ramaphosa was among the speakers at a memorial service who praised the king.

“It was during his reign that the Zulu nation achieved harmony and peace. It was during the course of his reign that his people alongside all the people of our country realised the dream of freedom from the injustices of colonialism and apartheid,” said Ramaphosa.

Others attending the memorial included former President Jacob Zuma, who is Zulu, and Princess Charlene of Monaco, who is from South Africa. 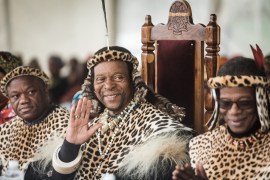 The monarch, who ascended to the throne in 1971, was admitted to hospital weeks ago for diabetes treatment. 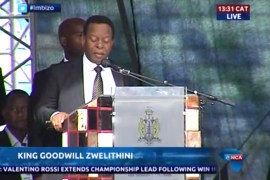 Zulu king calls for peace in S Africa after violence

King Zwelithini says every foreigner should be made secure after being accused of sparking anti-immigrant attacks. 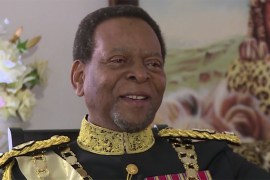 Zulu king: I won’t let my people forget our history

King Goodwill Zwelithini discusses the past, present and future of the Zulu nation and keeping its culture alive.