More than a dozen people are confirmed dead and at least 170 others missing after a chunk of a Himalayan glacier broke off and unleashed a devastating flash flood in India.

The wall of water barrelled down a valley in the northern state of Uttarakhand on Sunday morning, destroying bridges, roads and two hydroelectric power plants.

The Uttarakhand government said on Monday 14 bodies have been recovered from various locations while local officials said 170 others were missing. Fifteen had been rescued.

Some were trapped in two tunnels cut off by the floods and by mud and rocks.

With the main road washed away, paramilitary rescuers had to climb down a hillside on ropes to reach the entrance.

Officials said two dams had been emptied to stop the floodwaters from reaching the holy towns of Rishikesh and Haridwar where authorities barred people from going near the river.

Villages on hillsides overlooking the river were evacuated but, as night fell, authorities said the main flood danger had passed.

Floods in 2013 in Uttarakhand, which borders Tibet and Nepal, killed 6,000 people and led to calls for a review of development projects in the state. 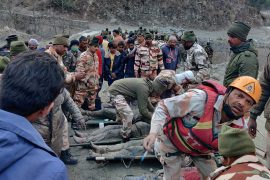 Officials say 14 dead and 170 others missing after a chunk of glacier breaks off, unleashing a devastating flash flood.