Five people were killed and more than 40 injured after a car sped through a Christmas parade in Waukesha, Wisconsin, on Sunday, knocking down dozens of people, including youngsters waving pompoms and a group of “Dancing Grannies”.

“At this time, we can confirm that five people are deceased and over 40 are injured,” the Waukesha Police Department said on its Facebook page. “However, these numbers may change as we collect additional information.”

Waukesha Police Chief Dan Thompson earlier told reporters that a person of interest was in custody and a vehicle had been recovered after the incident in the town of 72,000 that lies about 32km (20 miles) west of Milwaukee.

It was not known whether the incident was deliberate but there was no further danger and an earlier shelter-in-place order had been lifted, Thompson said.

Thompson said an officer fired shots at the vehicle in an attempt to stop the carnage.

A video on social media appeared to show police firing on the vehicle as it crashed through street barriers. Police did not believe shots had been fired from the vehicle, Thompson added, contrary to earlier reports.

President Joe Biden was briefed by aides about the events, a White House official said.

“The White House is closely monitoring the situation in Waukesha and our hearts go out to everyone who has been impacted by this terrible incident. We have reached out to state and local officials to offer any support and assistance as needed.” 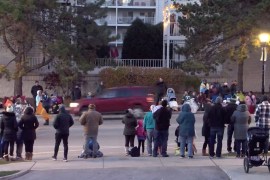 SUV drives through a Christmas parade in Waukesha, Wisconsin, killing five and injuring 40.