Monday marked the third night of unrest across the Netherlands that initially grew out of calls to protest against its tough COVID-19 lockdown.

The motivation behind the vandalism and other incidents in cities ranging from Rotterdam and Amsterdam to smaller centres of Haarlem, Geleen and Den Bosch was no longer clear, with rioters overwhelmingly in their teens.

Police said hundreds have been detained since the weekend as rioters threw rocks and in one case knives at police, and burned down a COVID-19 testing station.

The police trade union NPB said there could be more protests ahead as the lockdown drags on and the Netherlands’ vaccination programme has been among the slowest in Europe to get under way.

“We haven’t seen so much violence in 40 years,” police union board member Koen Simmers said on television programme Nieuwsuur.

The Netherlands was already under its toughest measures since the start of the pandemic, with bars and restaurants having closed in October, and schools and non-essential shops shut since December.

More than 13,500 people have died in the Netherlands since the start of the COVID-19 pandemic.

While the rate of new infections has been slowing, growing fears over new, more infectious strains of the virus prompted the government to announce the curfew. 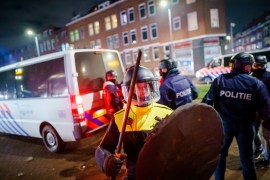