A winter storm piled historic amounts of snow onto parts of the US northeast on Thursday and wreaked havoc throughout the region, hobbling if not paralysing travel as it moved up the coast and bore down on New England.

The first major snowstorm of the season, which was expected to move out to sea by the end of Thursday, prompted officials to urge the region’s 50 million residents to stay home, a warning many had been routinely issuing anyway because of the pandemic.

“Given the heavy [snow] and difficult travel conditions, drivers are encouraged to stay off the road if they can during the storm,” Massachusetts Governor Charlie Baker said on Twitter.

The nor’easter, which delivered freezing rain and a wintry mix to some Mid-Atlantic states on Wednesday, dropped its biggest load of snow on an inland swath from northcentral Pennsylvania through southern New Hampshire.

The heaviest accumulation by Thursday morning was 45 inches (114 cm) near Binghamton, New York, a record for December, as snowfall amounts in parts of central Pennsylvania topped 40 inches (102 cm), according to meteorologist Bob Oravec of the National Weather Service (NWS).

“It’s a historic storm for areas inland that got underneath the snow band,” Oravec said by phone from the NWS Weather Prediction Center in College Park, Maryland.

“If you get underneath one of those bands, the snow rate can be tremendous – four or five inches per hour – and that’s what occurred today,” he said.

The storm left the New York City area with six to 10 inches (15 to 25 cm), more than all of last year’s winter storms combined, as it wound down on Thursday morning, NWS said.

The New York State capital of Albany was set to get more than 30 inches (76 cm) and Boston had nearly a foot (30 cm) with several hours of snowfall yet to go on Thursday morning, it said.

For areas of the Eastern Seaboard near the coast, including southern New Jersey and Massachusetts’ Cape Cod, the storm brought rain, high winds and some flooding.

As state officials struggled to clear roads, police reported hundreds of car crashes in the region, including more than 500 in New York and more than 200 in New Jersey. 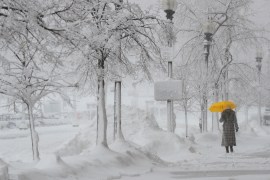 The storm dumped more snow on New York City than the total recorded last winter and is forecast to pummel New England. 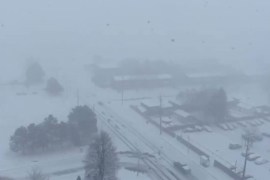 Winter in May – snowfall covers parts of northeast United States and Canada.