In Mexico, death is usually a cause for celebration during the annual Day of the Dead festival, which in 2003 was added to the UNESCO Intangible Cultural Heritage list.

On November 1 and 2, people across the South American country normally deck their homes, streets and relatives’ graves with flowers, candles and colourful skulls.

With its bright colours and cartoonish skeleton costumes, the Day of the Dead has become an internationally recognised symbol of Mexican culture. The festival centres around the belief that the living and the dead can commune during the brief period.

But this year, parades have been cancelled due to the coronavirus pandemic and many cemeteries – where families visited their loved ones and brought in music, food and drinks – were closed on Sunday.

The authorities have urged people to stay at home to avoid spreading the virus, which has killed more than 90,000 people in Mexico – one of the world’s highest tolls.

At the Panteon de Dolores, the largest cemetery in Mexico City, only a limited number of people whose relatives were being cremated or buried were allowed to enter.

Several flower shops remained open on the perimeter but there were few customers to be seen.

“It’s very sad, but there are rents and debts to pay,” said 76-year-old vendor Isidoro Avila.

The Day of the Dead, widely considered to be Mexico’s most important festival, is rooted in the indigenous Mexica culture, mixed with Christian superstition brought by the Spanish colonisers.

The Mexica were the dominant Indigenous population in pre-Hispanic Mexico.

The modern celebration is based on a Mexica legend that after death, people travelled through the nine regions of the underworld, known as Mictlan.

Usually, the capital hosts a parade of colourful skulls and “Calavera Catrinas” – a famous skeletal representation of death created by cartoonist Jose Guadalupe Posada more than a century ago. But this year, virtual events are replacing the usual festivities. 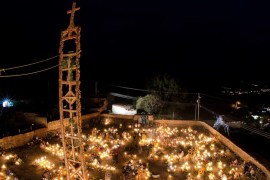 Day of the Dead: A unique understanding of death

Every year, Mexicans gather in cemeteries to remember their departed ones. Today Google celebrates the festivity. 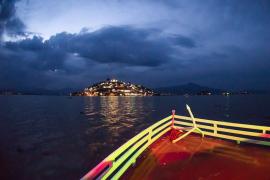 In Pictures: Mexico’s Day of the Dead

The traditional festival where families visit the graves of their ancestors mixes Aztec and Catholic beliefs. 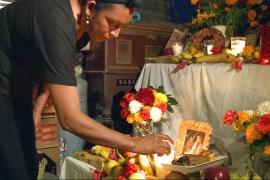 The Mexican town of Juchitan de Zaragoza holds elaborate celebrations ‘Dia de los Muertos’, or the ‘Day of the Dead’. But this year, there’s a sombre mood.