Tehran, Iran – When Samaneh Bayrami Baher marches in Pyeongchang on Friday for the opening of the 2018 Winter Games, she will be one of only four athletes representing Iran’s national colours.

Getting a spot to compete in the 23rd Olympic Games in South Korea was no easy feat for the 26-year-old athlete, who is the only female member of the country’s national cross-country skiing team.

Aside from limited financial resources, Iran also doesn’t have enough facilities for ski training. While the world’s top skiers train year-round, Iranian athletes are limited to about three months when it snows on the mountains.

This year has seen a lack of snow in Iran, meaning Samaneh travelled to Armenia and Turkey to train.

As a child, Samaneh fell in love with swimming, competing and winning three international events. She also trained for competitive cycling.

But skiing became her passion, and she began dreaming of competing in the Olympics.

While skiing she is required to wear a hijab, a compulsory garment for women in the Islamic Republic, as well as a skirt in compliance with the country’s customs.

Cross-country skiing is one of the toughest events in the Winter Olympics.

While training at Shemshak Ski Resort north of Tehran on Sunday, Samaneh described to reporters how “overwhelming” it is to scale mountains for long distances in sub-zero temperatures.

Samaneh said she is determined to give her best and “make her country proud”. 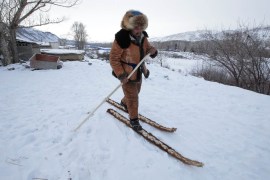 Archaeologists have dated cave paintings showing people on skis in Xinjiang between 10,000 to 30,000 years ago. 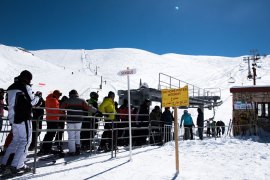