Antofagasta region, northern Chile – Juan Carlos Galvez and two other men are travelling in a run-down car along the coast of the Pacific Ocean searching for guano – the excrement of seabirds. They will sell what they find to shops that supply farmers who use the nutrient-rich excrement as fertiliser.

When they spot a white rock on the shore or on islands close to the mainland, their work begins. To reach one of the islands they must wait until the sea is calm. Then, they use the inflated inner tubes of a tyre, covered with a net, and a long rope to cross the ocean. They scrape the surface with large, sharp picks, filling bags with the guano. Each man can collect between five and 15 bags a day, depending on how difficult the surface is to scrape and navigate.

It can take anywhere from a week to a few months to clear one area. The more difficult the spot is to reach, the longer it may take, as the men often have to wait for the right conditions to cross the sea.

According to Juan, one 25kg bag of guano sells for 7,000 Chilean Pesos (about $10). The men share the money between them according to the number of days they worked.

When an area is scraped clean, the men must leave it for six months or so until it is again covered in guano. And that means moving on to another spot.

The work can be hard and it comes with dangers. Collecting guano is illegal in Chile because it can disturb the natural habitat of the seabirds. Those caught doing it face arrest – and risk having the bags of guano they have worked so hard to collect emptied into the ocean, buried in the ground or given away by the police.

The more remote the spots they work on, the less likely they are to be caught by the police. But this brings its own dangers. The men have to cross rough seas to reach remote island rocks. They don’t all always make it. There have been cases of guano collectors drowning, Juan says, although there is no data on the exact number. And there is the risk of falling from one of the rocks. Guano covered rocks can be slippery and men have been known to be badly injured or even killed falling from them. But because their work is illegal, their deaths aren’t always reported.

Still, Juan and his team say they will continue working as guano collectors because they have few other options available to them in the coastal towns from which they come and they must make a living somehow. 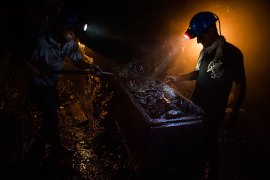 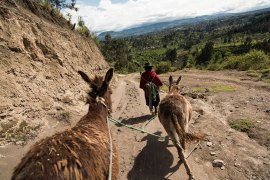