Cuetzalan, Mexico – In 2009, the Danza de los Voladores, or Dance of the Flyers, was recognised as an Intangible Cultural Heritage by UNESCO, the UN agency responsible for education, science and culture. It is a pre-Colombian, Mesoamerican ceremony that is still practised in very few areas of Mexico.

The ceremony is a rain and fertility dance seeking harmony between the ancient gods and the earth and its people. The performers dance around a 30-metre-high pole, then climb atop it. The flyers representing four elements – water, wind, earth and fire – perform a ritualised greeting to the four cardinal directions and fling themselves off while attached to ropes, spiralling down as the platform to which their ropes are attached slowly unwinds and lowers them to the ground. One person remains on top of the pole playing a flute, beating a drum and dancing.

The ritual has since been adapted to be performed during Catholic ceremonies and is also performed for tourists.

Cuetzalan village was named as one of Mexico’s first Magical Towns in 2002 by the Mexican National Department of Tourism. The programme was introduced to encourage local tourism. Villages can request a nomination if they meet certain criteria in historical, cultural and natural elements.

The status has brought much-needed publicity, tourists and funding. More tourists generate more donations and with the municipal funding, the Flyers can request new embroidered suits, that cost between 4,500 and 6,000 Mexican pesos each (around $250-$300).

This has also generated interest among local children in becoming Flyers themselves, which will ensure that the tradition lives on. 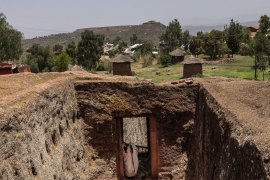 The World Heritage site draws visitors and pilgrims with its monolithic churches carved into the ground. 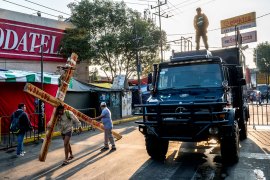 Millions Gather in Iztapalapa, Mexico City for Passion of the Christ ahead of Easter Sunday.