Wooldridge, Missouri, US – For the Pagan people of the Oak Spirit Sanctuary, Monday’s total solar eclipse was a spiritual experience as well as a spectacle.

Located in the Bible Belt of the United States, the Oak Spirit Sanctuary is one of the largest spaces for Pagan practice in mid-Missouri. Those who practice Pagan worship are a small minority and are often fearful of judgements and repercussions due to misconceptions over their rituals and beliefs.

Pagan beliefs focus on human relationships with the earth. Nature and the seasons have significance.

In Pagan worship, a solar eclipse is seen as the union of the sun and the moon. Pagans call on those who witness the solar eclipse to look into the dark parts of themselves.

The sanctuary drew hundreds of campers due to the unique nature of their events, as well as their location – Wooldridge is on the path of totality and, as a rural area, is far from light pollution.

Pagans believe eclipses are times for communing with their gods and goddesses due to heightened energy during such a rare cosmic event.

To Pagans, the solar eclipse is seen as a new beginning and a sign of growth. 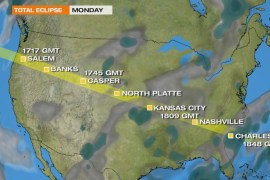 Total solar eclipse 2017: When and where to see it

Can you get to see this rare event, without risking cloud cover?