A gathering of hundreds of white nationalists in Virginia took a deadly turn when a car ploughed into a group of counter-protesters and killed at least one person.

The state’s governor blamed neo-Nazis for sparking the unrest on Saturday in the college town of Charlottesville, where rival groups fought pitched battles using rocks and pepper spray after far-right protesters converged to demonstrate against a plan to remove a statue of a Confederate war hero.

The violence is the latest clash between white supremacists – some of whom have claimed allegiance to Donald Trump – and the US president’s opponents since his January inauguration. 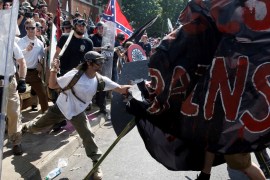