A powerful truck bomb went off on Wednesday in the centre of the Afghan capital, Kabul, killing at least 80 people and wounding hundreds of others.

The explosion laid buildings to waste, damaged dozens of cars and shattered windows hundreds of metres away.

At the Wazir Akhbar Khan hospital a few blocks away, there were scenes of chaos as ambulances brought in wounded and frantic relatives scanned casualty lists and questioned hospital staff for news. 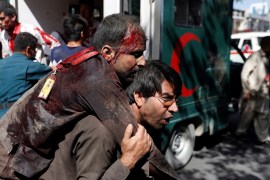