Mexico City- Every April for the last 174 years, massive crowds have been gathering in Iztapalapa, Mexico City, to express their Catholic devotion at the annual Passion of the Christ procession. A country with a massive Catholic majority, more than 80 percent of the population belonging to the faith in the last census, the event brings in millions of spectators to Iztapalapa – already Mexico City’s most populous borough. They come to watch thousands of actors in full costume wind their way through Iztapalapa’s streets to the summit of Cerro de Estrella where Jesus’ crucifixion is re-enacted, fake blood and all. The players come from all demographics, like Miguel Julian, a handyman from Iztapalapa who has been dressing as a Roman legionary for the last 17 years. When asked why he gives his time to sweat in the Mexican sun, clothed in heavy leather armour, he says, “to give thanks to God”.

Unlike in other parts of Latin America, where similar passion tributes date back to Spanish colonial times, Iztapalapa’s event was formed after a cholera epidemic in 1843 ended. To express their faith that God had saved them from death, locals wrote and stages their own version of the Passion of the Christ – an event that has now grown to be one of the region’s largest religious events.

The procession has become a point of local pride for Iztapalapa, an urban sprawl on the eastern edge of Mexico City, home to nearly two million people. One of the city’s lowest-income areas, Iztapalapa has been plagued by high crime rates and instances of domestic violence for years. The prestige and scale of the Passion procession are, therefore, a much-needed source of honour for a community that is so often portrayed negatively in the news. “I’ve been coming to this event since I was a little boy,” said 38-year old taxi driver and Iztapalapa local Omar Zepeda. “I used to carry the crosses up the hill like the others, and it always made me feel proud that this event happens here in Iztapalapa.”

While there are thousands of actors and participants in the parade, the competition for the main parts – especially Jesus – is fierce as the honour associated with such a role is immense. The actor who is chosen (this year 27-year-old Eder Omar Arreola Ortega won the part) must be able to drag a 100 kg wooden cross for roughly six kilometres, much of which is uphill. In order not to collapse in front of the nation’s TV cameras, he must train up to six months in advance.

Broadcast by satellite and now the internet all across the Spanish-speaking world, Iztapalapa’s Passion of the Christ is only growing in popularity, just as the religion itself continues to gain ground in the developing world. And there is every indication that massive crowds will continue to gather on Cerro de Estrella for years to come. 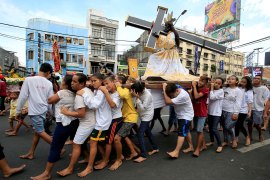 The procession is expected to last more than 20 hours and up to 15 million are expected to pay their respects. 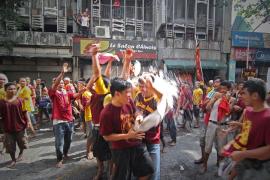 In pictures: Feast of the Black Nazarene

Millions of Filipinos marched through Manila in one of the country’s most spectacular religious events.