Mosul, Iraq – Last month, Iraqi forces resumed their assault on the city of Mosul, which has been under the control of the Islamic State of Iraq and the Levant group (ISIL, also known as ISIS) since 2014.

Surrounded by a diverse array of Iraqi forces, the remaining ISIL fighters are digging in for a fight to the end, using car bombs, snipers and grenade-laden drones to slow the troops’ advances.

Meanwhile, civilians have been fleeing Mosul in droves, with tens of thousands more expected to be displaced as fighting continues in the weeks ahead. 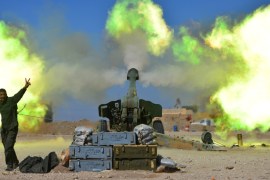 Security forces storm ISIL-held Mosul International Airport as they continue offensive on western half of the city.