Qayyarah, Iraq – Six months after ISIL fighters torched oil wells in Qayyarah, Iraqi fire crews are still battling the flames. Like a scene from a Hollywood blockbuster, a vast and pervasive darkness hangs over Qayyarah, as toxic black smoke billows from the burning wells.

Oil has been a key source of income for the Islamic State of Iraq and the Levant (ISIL, also known as ISIS) group, making Qayyarah an important strategic town. Its recapture last August by Iraqi forces was a significant gain in their advance towards Mosul.

Before fleeing, ISIL fighters used explosives to torch several oil wells, initially as a defensive measure to thwart coalition air strikes. But as the group began losing ground to Iraqi forces, they adopted a scorched-earth strategy, destroying as many oil wells as possible.

The operation to extinguish the fires, now in its fifth month, is proving to be a difficult, dangerous and time-consuming task. Teams of firefighters, machine operators, mechanics, engineers and safety experts have come from across the country to join the effort – but regardless of when the flames are extinguished, the human and environmental costs will probably linger for years. 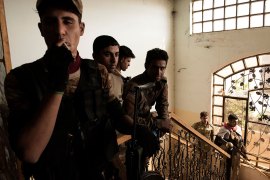 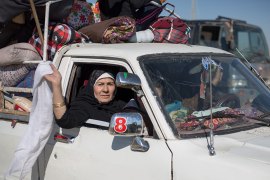