More than 2,000 people gathered at Brooklyn Borough Hall in Brooklyn Heights to oppose Trump’s ban, in an effort to highlight the role of immigrant labour in the city.

Many of them own the “bodegas” which were shuttered in protest. The small grocery shops and delis keep long hours and often serve as informal gathering places for neighbourhood residents.

Some protesters had relatives with pending US visa applications that are now on hold.

Arafat Aljamal of Crown Heights Deli and Grocery, 28, had applied for his wife and son to join him but was notified a few days ago that their case was suspended.

“Every single day I worry about them,” says Aljamal, speaking of the increasingly protracted war in Yemen.

“We have the rights to bring our families from back home. Everybody does.” 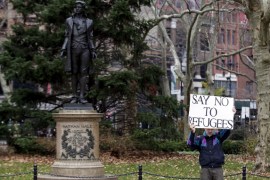 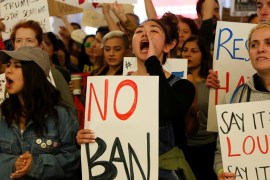 Travel ban on Muslims to include social media ‘vetting’