Baidoa, Somalia – Four-year-old Safia Adan lies in Baidoa Regional Hospital in southern Somalia with a tube through her nose. She is suffering from severe malnutrition and dehydration. At her side her worried grandmother looks up to explain that Safia first became sick after drinking water from the local well.

“The water had changed colour but we still drank it,” says her grandmother. “We stopped after Safia became sick. We brought her to the city because we knew you get could get good treatment here.”

They were lucky – seven people from their village are now confirmed dead and the hospital has seen a surge in children suffering from water-borne diseases such as cholera and diarrhoea.

They are the latest victims of the on-going drought ravaging Somalia that has left more than six million people, half the country’s population, facing food shortages and has seen water supplies become infected with bacteria rendering them undrinkable.

READ MORE: How to tackle repetitive droughts in the Horn of Africa

Last week the United Nations warned that a severe famine in Somalia was a distinct possibility and noted that if the rains failed again and urgent international action was not taken the country could see a repeat of the famine of 2011, which killed more than a quarter of a million people.

“In the worst affected areas inadequate rainfall and lack of water has wiped out crops and killed livestock,” the UN said in a statement released last week. “Communities are being forced to sell their assets and borrow food and money to survive.”

Aid agencies are particularly concerned that the drought is exacerbating the country’s on-going humanitarian crisis – 365,000 children under the age of five are acutely malnourished and 71,000 of those children are in need of urgent life-saving assistance.

“This time last year we had far fewer cases but due to the drought people will use any kind of water,” says Dr Abdullah Yusuf, medical coordinator for the Baidoa Regional Hospital. 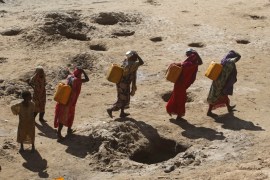