Nairobi, Kenya – After boycotting last week’s rerun of Kenya’s presidential election, opposition leader Raila Odinga denounced what he referred to as “sham elections with pre-determined outcomes”, and called for continued protests by his supporters and a second rerun vote.

Odinga’s long-time rival, incumbent Uhuru Kenyatta, won the controversial October 26 rerun, garnering about 98 percent of votes cast. Most Odinga supporters stayed well-away from polling stations last Thursday, claiming that no electoral reforms had been made since the Supreme Court nullified an August 8 vote due to irregularities.

The results announcement on Monday sparked protests in Odinga strongholds including the Kawangware, Kibera, and Mathare slums in Nairobi, as well as Kisumu in western Kenya.

In his Tuesday speech, Odinga stressed his supporters should resist with “economic boycotts, peaceful procession, picketing and other legitimate forms of protest”. However, the periods both before and after the August 8 and October 26 elections were marred by deadly street clashes pitting police against Odinga’s supporters.

There have also been several incidents of ethnic violence, and in Odinga strongholds ethnically charged rhetoric is frequently utilised as a rallying cry against the Kenyatta government.

In Kawangware on Tuesday, Odinga supporters expressed differing views on the best way forward. In an oft-repeated refrain, many said they were “waiting for baba” to give them instructions, referring to Odinga with the Swahili word for “father”. Others said they “are ready to die” to help put him in power.

“Let’s not lie that there will be peace. We youth have already decided [against it],” said a 27-year-old former soldier in Kawangware who identified himself as Kelvin Omanyo.

Omanyo, like many other Odinga supporters, decried the fact that “two tribes” rule the country, referring to the Kikuyu, of which President Kenyatta is a member and the Kalenjin, of which Deputy President William Ruto is a member.

Musungu Jackton, a shopkeeper, echoed these sentiments and said many of the deep divisions in the country came down to “inequalities” based on ethnicity.

“Even now, when you go to apply for a job [employers] just look at your name [so] they can tell which tribe you are from,” said Jackton, who is from the Teso tribe.

But as Kenya’s political impasse drags on into the fourth month and as the county continues to suffer economically, at least some loyal Odinga supporters are growing weary of continued conflict.

“I prefer for peace to prevail. Let us just move on because they have already stolen” the election, said Pastor Aggrey Sagala of the Holy International Church in Kawangware.

“If the Kenyan leaders don’t sit down together and we don’t stop voting along ethnic lines, we will all perish.” 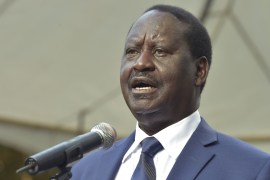 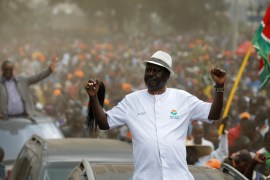 Raila Odinga says he will not recognise Kenyatta win

Opposition leader rules out contesting the outcome of Thursday’s vote in court, calling it ‘a waste of time’.