At least 50 people were killed and more than 400 injured when a gunman opened fire at a country music festival on the Las Vegas Strip on Sunday, raining down bullets from the 32nd floor of a hotel for several minutes before shooting himself dead, according to police.

The death toll, which police emphasised was preliminary, would make the attack the deadliest mass shooting in US history, eclipsing last year’s massacre of 49 people at an Orlando nightclub.

Cole Watson, who was at the concert with his wife and kids, said: “At first it sounded like someone was setting off a whole lot of firecrackers”.

He said when they “realised it was gunfire and everybody started running”.

“The scene was insane – it was absolute chaos,” Watson told Al Jazeera by telephone.

Some 22,000 people were in the crowd when the man opened fire, sending panicked people fleeing the scene, in some cases trampling one another, as law enforcement officers scrambled to locate and kill the gunman. Shocked concertgoers, some with blood on their clothes, wandered the streets after the attack.

At least 406 people were taken to area hospitals with injuries, the Las Vegas Metropolitan Police said. 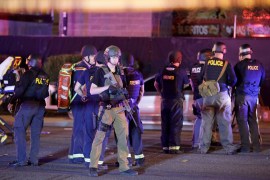 Gunman opens fire on concert-goers on the popular Las Vegas Strip in the deadliest US mass shooting in modern history. 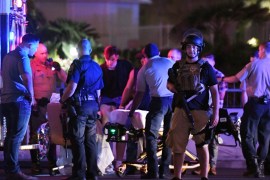 Police are investigating the shooting, which has left nearly 60 people dead and more than 520 people injured.