Nairobi, Kenya – With more than 2.5 million people in some 200 settlements, the slum dwellers in Nairobi represent more than half of the city’s population and occupy merely 6 percent of the land, according to a report [PDF] released in 2014 by the African Population and Health Research Center.

As the biggest slum in Africa and one of the biggest in the world, Kibera houses some 250,000 of them.

Every Wednesday at Spurgeons Academy, a school in the middle of the indecipherable maze of Kibera’s narrow streets and alleys, students take the chairs and benches out of a classroom and sweep the floor.

The school uniforms are switched to bright-coloured clothes.

When teacher Mike Wamaya enters the classroom, the students get into position and place one hand on the concrete wall as though it were a ballet bar.

Classical music plays out of a small portable speaker, and the class begins.

The Ballet class is part of Annos Africa and One Fine Days charity activities in slum areas around Kenya. Apart from ballet, the children can choose dance, music, creative writing and film. In Nairobi they work together with two schools in Kibera and one school in Mathare, another slum closer to the city centre.

“Ever since I was a kid and watched ballet on our TV, I wanted to dance and one day become a ballerina,” said Pamela, one of the students from Kibera who was very happy when she signed up for the ballet class. 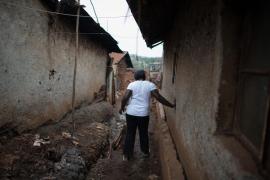 Yoga bends the trends in Kenya

New project trains yoga teachers and students in some of the poorest parts of Nairobi.