Palestinian Muslims celebrated the end of Ramadan this week, despite ongoing violence and an increased Israeli military presence in the occupied West Bank and East Jerusalem.

After a deadly attack in Tel Aviv at the start of the holy month, Israeli authorities initially froze more than 80,000 permits for Palestinians to travel outside the West Bank, although some were later allowed to cross into Jerusalem to visit holy sites and family.

While heightened tensions kept many at home, the Old City was still flooded with Muslim pilgrims and Palestinian worshippers as thousands gathered at Damascus Gate, the main entry point to reach the revered al-Aqsa Mosque compound.

INTERACTIVE: Inside al-Aqsa – A 360-degree tour

As youths, packed shoulder-to-shoulder, cheered and set off fireworks from the steps of the iconic gate, Israeli forces stormed the area several times on a recent night.

“If the army didn’t come here, there wouldn’t be so many problems,” an elderly Palestinian man told Al Jazeera after watching Israeli police detain a youth.

Israel’s Coordinator of Government Activities in the Territories told Al Jazeera that nearly 300,000 people crossed through military checkpoints across the West Bank during the four Fridays of this year’s Ramadan. The Old City remained busy throughout, until Eid al-Fitr brought Ramadan to an end on Wednesday. 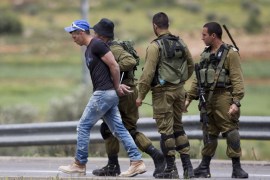 Monitoring group says 330 Palestinians, including 60 children, have been detained as raids in West Bank are stepped up.