Maghazi, Gaza – Tying the shoelaces of her bright green trainers, Inas Nofal prepares for her daily morning run. As Gaza’s first and only competitive female runner, the 15-year-old makes heads turn when she races down the streets.

“Running is my life,” Nofal told Al Jazeera. “Before I go to sleep, I think about which routes I’ll run the next day.”

Nofal started running last year with the support of a local coach, Sami Nateel al-Balad. Nofal’s father, Mahmoud, tirelessly follows the two in his car, ready to intervene if his daughter faces harassment from authorities or the community.

“Some people object to girls running and say bad things. It upsets me, but I try to hide it from Inas, because I don’t want it to discourage her from her dream,” Mahmoud said, noting he hopes she will help to change how society views girls and women.

Nofal hopes to win medals for Palestine at international competitions, but facilities for professional athletes are limited in Gaza. Three wars with Israel in less than a decade have caused major destruction in the small coastal enclave, leaving limited resources for sports and recreational activities.

Last month, Nofal suffered a further setback when she and dozens of other runners from Gaza were denied permits by Israel to travel to Bethlehem for the Palestine Marathon, which aims to shed light on Israeli-imposed restrictions on movement for Palestinians. 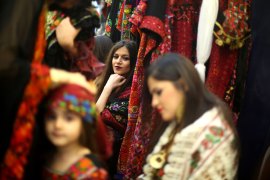 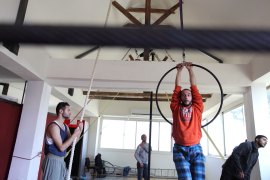 Circus performer Mohammed Abu Sakha has been held in administrative detention since December.