A fire broke out on Tuesday in a camp for internally displaced Muslims in Myanmar’s Rakhine State, destroying shelters where about 2,000 people had lived.

At least 14 people were injured, the United Nations said.

Camps in the area largely house members of the marginalised Rohingya Muslim minority, who were displaced by fighting between Buddhists and Muslims in 2012.

The fire at the Baw Du Pha 2 camp near the state capital of Sittwe started in the morning.

“Based on information currently available, at least 14 people were injured by the fire. There are reports of fatalities but this has not been verified,” the UN said.

The fire destroyed about 44 “long houses” and damaged up to nine, affecting 440 households, it said.

Myanmar’s Rohingya population is stateless and thousands of them have fled persecution and poverty, often by boat to other parts of Southeast Asia.

Some 125,000 Rohingya remain displaced and face severe travel restrictions while living in camps.

Faced with apartheid-like restrictions that limit access to jobs, education and healthcare, thousands have braved perilous boat journeys in search of better lives in Malaysia and Indonesia. 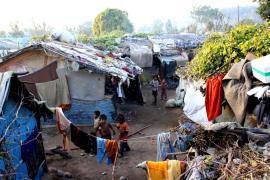 Hundreds of persecuted Rohingya families have found refuge in Kashmir after fleeing Buddhist attacks in Myanmar.