Rafah border crossing, Gaza –  Egypt opened its border with Gaza for the first time in three months on Wednesday. The Rafah border crossing is the only remaining gateway for Palestinians in Gaza to the outside world, after Israel imposed a siege on the Strip in 2007.

With this total closure, 1.8 million Palestinians are “locked in and denied free access to the world”, as the United National agency, the Office for the Coordination of Humanitarian Affairs, wrote in a report in July 2015, a condition which is weighing heavily on people’s mental wellbeing.

Some 30,000 Gaza residents are on a waiting list to cross at Rafah. Only a few thousand, including patients, students and holders of residency permits in third countries, were likely to do so on Wednesday and Thursday before it closes again.

After Abdel Fattah el-Sisi, and the Egyptian military, toppled President Mohamed Morsi in July 2013, relations with Gaza deteriorated dramatically. Egypt’s new rulers consider Hamas as an extension of the Muslim Brotherhood, which they designated as a terrorist organisation . 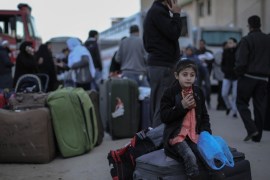 Hundreds with urgent needs cross into Egypt from besieged Gaza Strip, as border opens for first time in two months.