Kenya’s president set fire to thousands of elephant tusks and rhino horns, destroying a stockpile that would have been worth a fortune to smugglers and sending a message that trade in the animal parts must be stopped.

Plumes of smoke rose as the flames took hold of the tusks piled up in a game reserve on the edge of the capital Nairobi, destroying 105 tonnes of ivory from about 8,000 animals, the biggest ever incineration of its kind.

President Uhuru Kenyatta dismissed those who argued Kenya, which staged its first such burning in 1989, should instead have sold the ivory and the tonne of rhino horn, which by some estimates would have an illegal market value of $150m.

“Kenya is making a statement that for us ivory is worthless unless it is on our elephants,” he told dignitaries before setting light to the first of almost a dozen pyres. 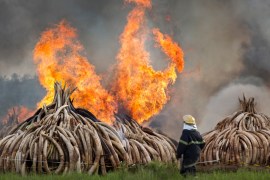 Kenya burns 105 tonnes of ivory in bid to stop poaching 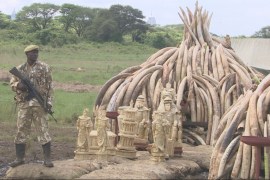 African leaders to gather in Nairobi to discuss how to tackle the dwindling number of elephants in the continent.