Kiev, Ukraine – On a fine spring night, just ahead of the weekend in the town of Pripyat in northern Ukraine, the sleeping people awoke to the sound of an explosion. Oleksandr Galuh was in fourth grade at the time. He recalls that night well. “My mother woke up as the windows shattered. She thought it was a thunderstorm.”

At 1:23am on April 26, 1986, reactor number four of the Chernobyl Nuclear Power Plant blew up in flames in the worst nuclear accident in history. The fires burned for 10 days, spewing radioactive fallout over tens of thousands of square kilometres.

Nikolai Fomin is a tour guide, working in the 30km exclusion area around the Chernobyl reactor dubbed “The Zone”. People in Ukraine don’t like to talk about Chernobyl because it is seen as a bad part of their history, a terrifying place, he says. “But … We should remember that nuclear power is not without consequences”, says Fomin.

Accurate figures on the number of people affected by Chernobyl are difficult to find. According to data collected by Vadim Bozhenko, medical director at the hospital for radiation diseases in Kiev, as of January 15, 2015, more than two million people were affected by the power plant disaster. Of these, 453,391 were children.

“There are lots of children living in polluted areas that ingest radiation through food and water. Children and grandchildren of Chernobyl victims present inborn malformations,” the doctor says.

Ukraine has 15 nuclear reactors between its four nuclear power plants, of which 12 have a designed lifetime that ends before 2020. The government in Kiev, together with the operating company Energoatom, is determined to keep all reactors running for at least ten years beyond their expiry date. Four units have already received licences for their expanded lifetime.

But the reactors are in a bad shape. Between 2010 and 2015 alone, three different units were forced to shut down owing to accidents, while severe safety issues were identified in two more units.

Ukraine’s nuclear power plants currently supply more than half of the country’s electricity.

But nuclear disasters are not limited by borders and outdated technology and equipment pose a hazard for neighbouring countries as well. Galuh questions the wisdom and feasibility of extending the life of old nuclear power plants. In the end, “there is no such thing as the peaceful atom”, he says. 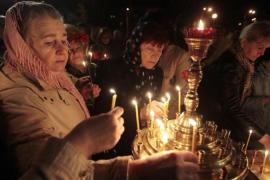