Melilla, Spain – At 6:30am, the sun has not made its appearance yet  and the border of Melilla’s Chinatown quarter is illuminated by the orange glow of street lamps.

The border crossing is a maze of wires and winches that convey a sense of unease and fear.

The  six metre-high border fence across the road, contributes to the feeling of a hostile environment that surrounds Melilla, the tiny Spanish enclave in the northeast of Morocco. Ahead, on the Moroccan side, the murmur of distant shouts and blows can be heard.

At 6:45am the sound increases and moving silhouettes of nervous police officers can be seen on the metal structures. A large crowd gathers at the gates waiting to pass to the Spanish side. Moroccan guards shout and beat the people back from the entrance with wooden sticks. With every passing minute the blows and screams combine in a crescendo, like a symphony of noises and yowls.

On the Spanish side, a 100 metres from the border, dozens of lorries  jostle for a good parking spot. They spit out mountains of bundles, some weighing up to 80 kilos.

At 7am, the border gates open. Once past the border, dozens of Moroccan women and men run to the piles of packages. Their goal is to take one and pass it to Morocco as soon as possible to return and catch another and, if possible, yet another.

Organisations on either side of the fence run what has become to be known as “atypical trade” an illicit smuggling business that at an average of $5.6 per bundle, brings very little income to the load-carriers themselves. 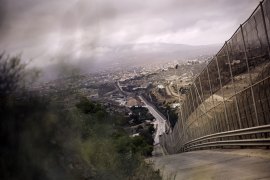 On the Spanish-Moroccan border in Africa, refugees pay smugglers, bribe guards to cross into European enclave.