Chiang Mai, Thailand– Every year in northern Thailand, groups of men gather to take part in a unique activity: beetle fighting. Some men come to fight beetles and gamble, while others come simply to meet and socialise with friends. The fights are organised once a year and offer a break from the daily routine in small, agrarian villages.

Participants are typically low-income farmers, but there are also wealthy competitors.

Locals capture the rhinoceros beetles in the jungle during the beetle mating season in September. An average beetle can be sold for about 50 baht ($1.40), but a champion-caliber insect can go for as much as 3,000 baht ($84).

The owners bring their beetles to the small arenas where the fighting takes place. They match the beetles by size and character and when two similar beetles are found, bets are placed and the competitors will head onto the fighting stage – a log of wood, crafted with holes wherein a female, pheromone-secreting beetle is trapped. The two male beetles are thus motivated to fight over the female beetle.

They lift and push their opponents with their huge horns; the victorious beetle will break its opponent’s horn or cause it to flee.

The losing beetle is typically returned to the jungle, while winners are kept on pieces of sugar cane to fight again. 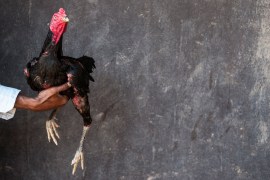 In Madagascar, cockfighting is big business

Traditional sport is major source of income for many with wealthy enthusiasts betting even cars and houses on roosters. 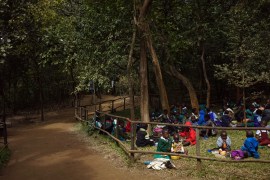 Helping Malawi’s animals back into the wild

From monkeys to pythons, antelope to lions, the Lilongwe Wildlife Trust rescues, rehabilitates and returns animals. 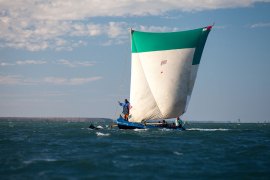 Madagascar: On the hunt for sharks

As fisheries collapse due to overfishing and climate change, Madagascar fishermen migrate further out to find fish.