The 62-year-old followed in the footsteps of his father, grandfather and great-grandfather – and the relatives that came before them – by taking the helm of the family business. And that business is soap.

Sharkass Soap was founded in 1803 in the Old City of Tripoli, in northern Lebanon, where Mahmoud continues to make various styles of fragrant soaps by hand. The craft has been passed down from generation to generation, Mahmoud explained inside the modest factory, as he went through the steps involved in making each bar.

Sharkass Soap is one of the most well-established soap factories in Tripoli, a city with a long history of celebrated soap-making. The Pasha of Tripoli, Yusuf al-Saifi, established the Khan al-Saboun (Soap Khan) at the centre of the city in the 17th century. 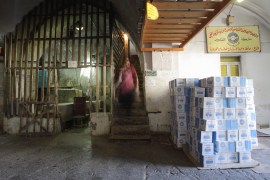 The Tuqan factory in Nablus is the oldest survivor of this once-prominent industry.