Lapaya, Uganda – Outside the village of Lapaya, in northern Uganda, the Agogo river plunges 50 metres over the edge of a rocky escarpment in a series of dramatic waterfalls. Few tourists make it to this remote part of the country, but come here on a Monday and you will see several young men perched on a flat rock at the top of the falls, wearing white lab coats and staring intently at their exposed calves.

These men are at the forefront of the battle against Onchocerciasis, or river blindness, a little known fly-borne tropical disease that has terrorised the area for as long as anyone can remember. Their job is simple – wait for the flies to attack, then catch them before getting bitten – and so far it seems to be working.

“When I was a boy it was so bad” said Charles Okello, a 35 year-old flycatcher. “So many people in the village went blind, and their skin became like a leopard’s. We are very afraid of the black fly. But we’re going to finish them.”

The captured flies, which are preserved in alcohol until they can be taken to a laboratory in Kampala for testing, provide crucial information on the spread of the disease, which feeds back into an eradication program focusing on mass drug administration and the dosing of rivers with chemicals.

A few years ago the team would regularly catch over 100 flies in a single day, he explained, over the roar of the falls. Now that number has dropped to just three or four.

River blindness is a gruesome disease. The bite of an infected Simulium blackfly – “like getting an injection” said Bukelo – leaves behind microscopic larvae which penetrate into the wound. These grow into adult worms, up to 30cm long, which gather in lumpy nodules under skin and in turn start to release new larvae.

The first sign of the disease is usually an itching of the skin, which can be severe once the larvae start to attack the pigmentation, leading to a distinctive ‘leopard skin’ appearance. If untreated, the larvae may enter the eye. At this stage the victim will be able to see the miniature worms wriggling up and down within the cornea. Blotchy patches appear in the field of vision and if left unchecked the victim will in time become completely blind.

The CDC estimates that there are still some 25 million people suffering from the disease, 99 percent of them in Africa.

Half the village is blind

Lapaya, a ramshackle village of mud huts and banana trees, linked up by a web of sandy tracks, has already taken a heavy toll. Locals estimate that over half the village suffers from vision problems; many have lost their sight altogether. Abandoned homes dot the landscape, a legacy of a particularly large hatch of blackly in 2008 that forced many to flee the area.

“Even the chickens ran away,” said Owot Moses, who started losing his sight five ears ago, and is now only able to distinguish blurry areas of light and dark. “When I was working in the fields the black flies used to cover my whole body. The flies were so bad we couldn’t be outside after five pm.”

There is little support for the blind in Uganda. Moses was unable to continue working and his wife left him. He now lives alone in abject poverty in an isolated shack at the edge of the village.

For 21-year-old Okello Norwell, losing his sight as a child meant giving up any hope of getting an education.

“At first I could see the worms moving up and down in my eyes,” he told in the pitch darkness of his mud home, gripping the cane he uses to navigate his way around the family compound.

“Then I became blind forever. I want to do do something in my life but I can’t,” he said. Norwell is one of three people in his family who have gone blind from Onchocerciasis.

But in recent years a renewed offensive against the disease funded by Sightsavers and the Carter Centre has had a dramatic impact, explained the head of the Pader district’s vector control program, William Sam Oyet.

As well as collecting data on the disease through the fly catching program, every Saturday for the last 4 years Oyet’s team has set off on bicycles with tanks of chemicals to spray the faster flowing sections of local rivers, like the waterfalls at Lapaya, where the blackflies like to breed. Temephos, he explains, is a larvicide, and does little harm to the rest of the river’s ecosystem.

Then, twice a year he sends Okello and the team out to conduct a massive drug distribution exercise that aims to provide every member of the district with Ivermectin, a powerful drug that prevents infection and helps to fight the disease in it’s earlier stages (after a certain point the damage becomes irreversible). The amount of pills distributed is decided according to body size, so the team travels with a handy stick to take measurements.

Moses Okipi, Sightsavers’ country director in Uganda, said transmission is now occurring in only 9 of the 36 districts that once suffered from the disease and that the country is on course to have it completely eliminated by 2020.

“It has had a terrible impact on northern Uganda” said Okipi. “The blindness, the family breakups, the school dropouts. But finally we are on top of it. The end is now in sight”. 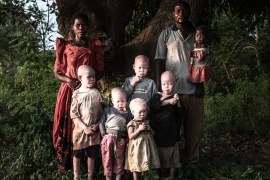 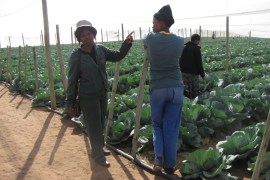 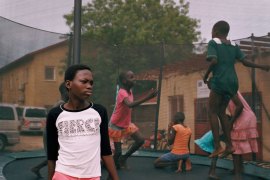 Meet the girls who must overcome conflict, hunger, stigma and sexual abuse just to go to school.