Thailand’s King Bhumibol Adulyadej, who was the world’s longest-reigning monarch, has died in hospital, the palace has said in an announcement.

The highly revered king was 88 years old and spent most of the past decade in hospital for a variety of ailments related to old age.

Adulyadej had been Thailand’s king since 1946 and had earned the deepest respect from the vast majority of Thais. 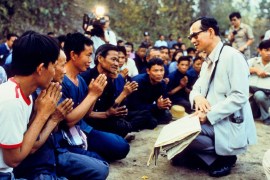