Athens, Greece – Children from five refugee camps across Greece attended local schools this autumn. On Monday, October 10, students of all ages queued up behind the camp gates and waited for the chartered buses scheduled to transport them to nearby schools to arrive at 2pm.

The Greek Ministry of Education did not make a public announcement of the list of participating schools because some parents’ associations had mounted protests against the government plans.

But, at 2nd Tavros Elementary School in Athens, neighbours waited outside for more than an hour to greet the children when they got off the bus at 3pm, meeting them with warm applause and cheers. The Greek students welcomed the refugee children with songs and drawings.

On their first day refugee students stayed at school for only two hours, but their daily schedule will run from 2pm to 6pm. The children will have special classes to include Greek language courses, in addition to English, maths and arts, until they are sufficiently fluent in Greek to be able to join the main school programme.

The government aims to make schooling available for all refugee children in Greece.

MORE: The desperate journeys of refugees 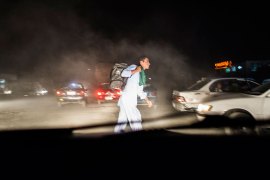