Caracas, Venezuela – Venezuela is in the midst of a severe economic crisis. The country, though one of the richest in natural resources, has been called the worst economy of 2016 by the International Monetary Fund, and its inflation rate could reach 700 percent by the end of the year.

Today, the biggest concern for Venezuelans is the food shortage, together with rampant crime and the lack of medicine.

Every day, thousands of people reach supermarkets or shops, sometimes as early as dawn, patiently waiting in long lines just to buy a few pieces of basic food items, such as rice or flour, at a lower price set by the government.

The alternative to “colas” (food lines in Spanish) can be found in expensive supermarkets, where only the wealthy can afford to shop. The others rely on “bachaqueros”, or food smugglers who re-sell on the street subsidised goods at much higher prices.

WATCH: Life on the line – Inside Venezuela’s crisis

In the slums of Caracas, the situation is difficult. Many families are unable to provide two to three meals a day for their children. Lunch often consists of a banana or a piece of bread.

As a result of this climate of uncertainty and helplessness, crime is rising fast in Venezuela, especially in Caracas, already ranked in 2015 as the most violent city in the world.

In the rest of the country, the food crisis is worse, and health workers have noted increased cases of malnutrition within the poorest segments of the population.

RELATED: Venezuelans flock across border due to food shortage 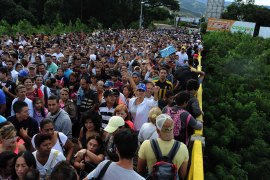 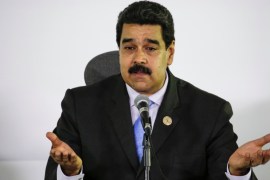 Venezuela: No recall vote for Nicolas Maduro in 2016

Electoral authority rules that a referendum to remove President Nicolas Maduro cannot be held this year.