Kyoto, Japan – The orange gates, known as “torii”, of the Fushimi Inari-Taisha shrine are one of Japan’s most iconic landmarks. Overlooking the former capital city of Kyoto from Inari Mountain, they dot the landscape, attracting thousands of visitors of all faiths each day.

Not to be confused with often similarly-styled Buddhist temples, Fushimi Inari-Taisha belongs to Shinto, the ethnic religion of the people of Japan practiced by over 70 percent of the population. In Shinto, shrines are devoted to the worship of multiple gods called “kami”. Kami are believed to possess a deep connection with nature and may have positive or negative characteristics, depending on the kami.

Inari, the kami that Fushimi Inari-Taisha is dedicated to, is a popular figure in Shinto practice and is the Japanese deity of foxes, rice, fertility, agriculture, industry, and general prosperity.

Closely associated with industry and economic success, Inari is a popular kami for Japanese business owners, who have donated thousands of gates to Fushimi Inari-Taisha hoping to increase their fortunes.

Shinto shrines in Japan are organised into cross-country networks of small and large shrines according to which kami they are dedicated to. Shrines devoted to Inari’s worship make up the largest shrine network in Japan, with an estimated 32,000 sub-shrines located throughout the country. Fushimi Inari-Taisha, the largest of the Inari shrines, is the head shrine of the Inari network. 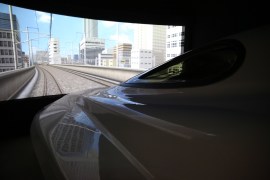 Rural train lines, important lifelines for towns across Japan, are increasingly at risk of closing down.