“I need some money. I want to get to Germany,” says a young Afghan, who is using his mobile phone to get in touch with a member of his family back home. Now, he is totally broke and has just made it to Greece.

Another Afghan has brought two of his four children with him.

“We have left our older daughters in Afghanistan with their grandparents. Our hearts ache. We will get them as soon as we can,” he says.

Two days ago they were sleeping in a makeshift camp in central Athens. The conditions were harsh. On a rainy day, they were transferred to Eleonas camp along with other refugees.

Eleonas, which can accommodate 700 people, is the only refugee camp set up by the Greek authorities. It is situated in a western suburb of Athens, not far away from an underground station.

“Here refugees have a place to sleep, clean water, electricity, wi-fi, decent meals, and doctors if needed,” says a volunteer who offers help at the camp.

Refugees, mostly Afghans and Iranians, stay there for three to four days, just to catch a breath and prepare for their long journey ahead to central Europe. Then others will take their places.

Unlike Syrians, Afghans have to wait longer to continue their trip. They do not have enough money, and their papers are usually delayed.

For the authorities, non-Syrians are considered economic migrants, not refugees. Thus, Syrians have priority at the hot spots where papers are given, and Afghans are stuck in makeshift camps. 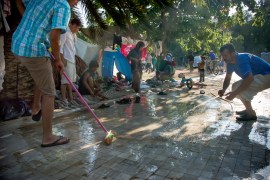