A joint statement by the United Nations, the African Union and the Economic Community of West African States (ECOWAS) had demanded “the immediate and unconditional release of the hostages”.

Street protests erupted outside the presidential palace where the interim leaders were being held, with RSP officers firing shots to disperse demonstrators. At least 10 people have been killed and more than 100 injured in protests sparked by the coup, which came just weeks before what would have been the first election since longtime leader Blaise Compaore was ousted in a popular revolt last October after trying to extend his 27-year grip on power.

Diendere on Monday apologised to the nation and said he would hand over control to a civilian transitional government after a warning from the military that its forces would converge on the capital and forcibly disarm the soldiers behind the power grab.

After the announcement, people took to the streets to celebrate what they hoped meant the end to the coup and the chance of elections later this year. 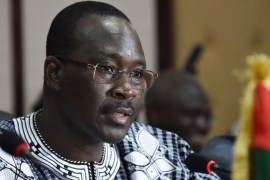