Athens, Greece – The Greek general election’s result is a tremendous personal achievement of Alexis Tsipras. His supporters celebrated the victory outside Syriza’s headquarters and the party’s election kiosk at Klathmonos square in central Athens.

Despite every prediction that the race was too close to call, the radical left party Syriza defeated the conservative New Democracy party by a margin of 7,5 percentage points.

The result confirmed Tsipras’ domination at the Greek political stage. “I don’t understand what they’re thinking of. He has promised to rip the memorandum, but he has just signed a new one. He is a liar and he will destroy us” said a 50 years old shopkeeper, who voted for Tsipras’ rival, Vaggelis Meimarakis.

During 20 days electoral campaign, Tsipras promised to fight corruption and improve the new austerity programme, which he accepted after almost 7 months of negotiations with the country’s creditors.

“He will implement a memorandum but he is not like the others. New Democracy and Pasok brought us to this situation and now they claim to have changed. They haven’t changed a bit” a pensioner said in Tsipras’ defence.

Although traditionally elections are a rather tense period in Greece, this one was really calm. After all, Greeks have voted three times in 9 months: there were general election in January and a referendum on the programme in July, just two months before the new general election.

“What’s the point of this election?” a 25year old woman asked, and she was not the only one. 43% of the voters abstained, which is a record for Greece.

Tsipras asked voters for a stable government, and now with the radicals of Syriza out of the party as well as the parliament, maybe he has it.

On Tuesday he is to form a government with his former ally, the small right wing party Independent Greeks. Many progressive voters find this alliance unnatural. Much to their dismay, Tsipras appeared together with the party’s leader Panos Kammenos at Syriza’s election kiosk to conceal the alliance and celebrate the victory in the elections.

Tsipras declared that his victory belongs to the people and those who dream of a better future. His supporters cheered, danced and sang at Klathmonos square. Some Italians too.

They waved flags reading L’ Altra Europa con Tsipras (The Other Europe with Tsipras), to celebrate the victory of a radical left leader who has promised to try to change Europe. “No to austerity, yes to democracy” was their slogan.

Greeks do not seem to hope for ripping the memorandum anymore. They hope for change; they hope for a better future. 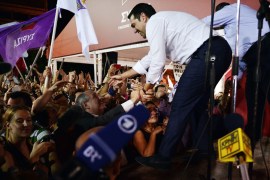