Oklahoma City, United States – The rodeo is an American tradition. It evolved from a leisure activity among cowboys who worked on cattle ranches when farming was king in the US, into the aggressive sports competition of today.

Rodeos – which attract and entertain huge crowds in the US – also play a role in preserving the tradition of the cowboy in modern society. Yet, this highly popular event has come under attack from animal rights groups who allege steers and broncos are harmed.

It is that kind of activity for which People for the Ethical Treatment of Animals (PETA) condemns rodeos, in what they call cruel treatment of the animals.

PETA accuses rodeos of using equipment such as bucking or flank straps and electric prods to agitate animals and make them behave aggressively.

The group claims the animals used in rodeos often suffer from injuries such as deep organ bleeding, haemorrhaging, ripped tendons and torn ligaments.

Professional rodeo organisers, however, refute the mistreatment allegations. The International Professional Rodeo Association, one of the largest sanctioning bodies in the US, insists rules and regulations are in place to prevent any wrongdoing.

More on the story 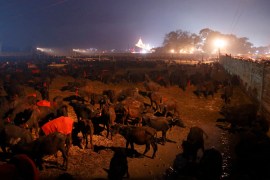 World’s biggest sacrifice of animals at any one site kicks off in village despite protests from animal rights activists. 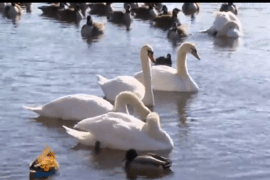 The US Department of Conservation proposes virtually eliminating city’s mute swans in 10 years.