Thousands of tourists are stranded on three Indonesian islands after ash from the Mount Rinjani volcano forced the closure of three airports, and blanketed villages and farmlands.

The closure of the airports affected a total of 692 international and domestic flights, which were either cancelled or delayed, the ministry said.

Airlines were told to avoid routes near the mountain and a decision about reopening the airports will be made early on Thursday, said ministry spokesman Julius Barata. 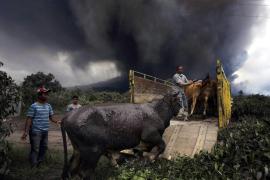