Refugees stranded at the Greece-Macedonia border have stripped down and sewn their lips together to protest against the restrictions placed on their movement.

A group of Moroccans, Iranians and Pakistanis, stranded by a policy employed by Balkan states to filter the flow of people passing through the region, blocked rail traffic and demanded passage to western Europe on Monday.

Last week, Slovenia, a member of Europe’s Schengen area of passport-free travel, declared it would only grant passage to those fleeing conflict in Syria, Iraq and Afghanistan, and that all others deemed “economic migrants” would be sent back.

That left leaving a growing number of refugees stranded in tents and around camp fires with winter approaching.

Rights groups have questioned the policy, warning asylum should be granted on merit, not on the basis of nationality. 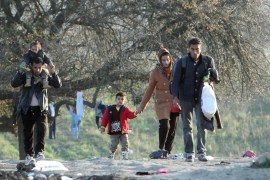