By
Umut Uras and
Huseyin Narin

Istanbul, Turkey – Turkey’s Justice and Development Party (AK party) has swept a majority victory in a snap poll held on November 1, allowing it to lead the country alone after less than a half-year break.

Turkey voted in parliamentary elections for a second time in five months on Sunday amid instability from neighbouring Syria and renewed violence over the Kurdish conflict.

With nearly all of the votes counted, the party was leading with 49.4 percent of the votes, followed by the centre-left Republican People’s Party (CHP) with 25.4 percent, Nationalist Action Party (MHP) with 11.9 percent and the pro-Kurdish, left-wing Peoples’ Democratic Party (HDP) with 10.7 percent.

The AK party is predicted to claim 317 seats in the 550-seat parliament, giving it a majority to govern alone.

Going through a second general election in five months, and following the bomb attack in Ankara on October 10, many parties cancelled their campaigning.

However, after the results were clear, masses of AK party voters rushed onto the streets and to the party headquarters to celebrate the victory. 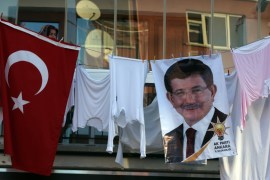 Stability sought in second parliamentary elections in five months amid instability from Syrian and Kurdish conflicts.