A state-owned manufacturer on Monday unveiled the first plane produced by a Chinese initiative to compete in the market for large passenger jetliners.

China is one of the biggest aviation markets but relies on Boeing and Airbus aircraft. The multibillion-dollar effort to create the homegrown C919 jetliner is aimed at clawing back some of the commercial benefits that flow to foreign suppliers.

The Commercial Aircraft Corporation of China (COMAC) showed off the first of the twin-engine planes in a ceremony attended by some 4,000 government officials and other guests at a hangar near Shanghai’s Pudong International Airport. 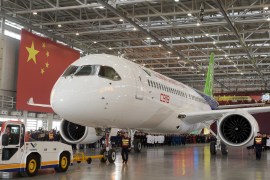