Chaos has erupted in a Slovenian border town, as thousands of people pushed through metal barriers and a police cordon, to force their way into Austria, part of an ongoing refugee crisis, which claimed more lives off the waters between Greece and Turkey.

Several people, many holding children in their arms, were seen collapsing amid the melee on Friday afternoon near the Slovenian refugee camp in Sentilj on the border with Austria.

Al Jazeera’s Ivan Corkalo, reporting from Sentilj, said an estimated 3,000 people managed to cross the border into Austria, while around 4,500 more are waiting to cross in the Slovenia side.

“They are very tired and desperate, as they tried to push their way through the barriers,” he said, adding that the refugees are expected to stay in the area throughout the night, until authorities in Slovenia and Austria reopen the border.

Of those who were left behind, around 1,500 men, women and children were camped outside the border’s gate, “huddled in cold weather, with limited supply of food, water and clothing.”

Another 3,000 refugees are staying in makeshift tents, he said.

Nearly 105,000 refugees have entered Slovenia in the last two weeks. Many of them are fleeing wars and poverty in the Middle East, Asia and Africa.

There have been fears that Austria would close its border with Slovenia, following reports that it is planning to  build a fence  to “control” the refugee movement.

Further south in Greece, at least 17 children were among those reported to have drowned earlier on Friday when three boats coming from Turkey sank, Greek port authorities told Al Jazeera.

The current death toll is at 29, according to Greek authorities. Rescue officials and volunteers in Greece and Turkey managed to rescue 157 other people.

By mid-October many predicted the numbers of refugees crossing the Aegean Sea from Turkey to the Greek island of Lesbos in small rubber dinghies would sharply decrease, due to colder weather and rougher seas.

But that has not stopped thousands of refugees and migrants from arriving every day en route to a better life in Europe.

Most of the travelers were families: Parents and small children arrived drenched to the bone after the choppy seas threw waves into the overcrowded boats.

Once on land, parents embraced their children, some lost consciousness. Most of those arriving were from Afghanistan and Syria, and smaller numbers from Iraq, Iran, Somalis and Pakistan.

The refugees explained that they already had a child or parent who traveled to the EU with friends and relatives in the past year.

But they said the EU’s process for family reunification is taking too long, in many cases one year or more, leaving them with no choice but to make this journey as the situation for refugees becomes more difficult in countries like Turkey, Lebanon and Jordan.

The rough seas caused many of the passengers to get seasick, with children’s lifejackets covered in vomit.

The distance from Turkey to Lesbos is around five km, and if refugees could travel normally they would pay around 25 euro for a ticket on a ferry. Instead they pay around 1,200 euros or more for the dangerous voyage.

The tiniest of bodies have started washing up on the Lesbos shore, most likely from the boat that sank two days ago.

On Wednesday volunteers watched from atop a hill as off in the distance dozens of bright orange lifejackets could be seen spread across the water.

There was little they could do to help the people, who were later saved by the Greek coast guard, which said 242 were saved, 11 were found dead and many more missing.

Earlier on Friday, Alexis Tsipras , the Greek prime minister, decried Europe’s “inability to defend its values” by providing a safe alternative to the dangerous sea journeys in frail boats provided by smuggling gangs.

“The waves of the Aegean are not just washing up dead refugees, dead children, but [also] the very civilization of Europe,” he told parliament. 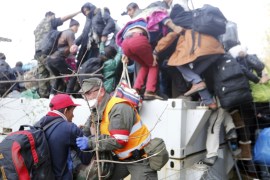 Austrian police say around 7,000 people gathered at the border after Slovenia transported many refugees by train. 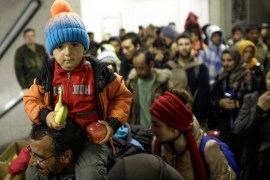