Tovarnik, Croatia – Imagine leaving behind your home, your life, fleeing war and persecution, taking with you only what you can carry. Thousands of kilometres later, these fragments of your life lay discarded on the roadside and platform edges, the only traces that your anguish passed through these nondescript towns.

Over half a million people have crossed the Mediterranean to Europe this year, with over half of them coming from Syria, according to the United Nations Commissioner for Refugees.

Since September 15, when Hungary closed its border with Serbia, over 80,000 people have crossed through Croatia, many through the small town of Tovarnik, just over the border from Serbia.

The majority of these people crossed the Aegean sea, paying smugglers to cram them into tiny boats leaving Turkey, bound for Greek islands. Refugees in Tovarnik told Al Jazeera smugglers had thrown their bags of clothes and trinkets into the sea, the last vestiges of their lives “too heavy”. They were left with the clothes on their backs, and the promise of what lay ahead.

Their route to Croatia involved a string of buses, trains, and taxis, punctuated by long walks, crossing borders through fields. Entering the European Union, their momentum was halted by the fences that Hungary erected, and the human tailbacks this caused in Croatia. At each point along the way, items of clothing, a lost shoe, crushed sunglasses, marked their passage. 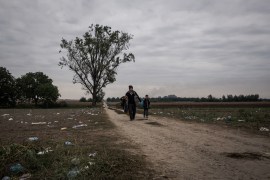 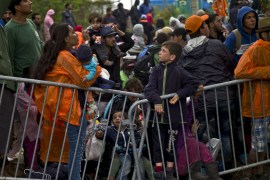