Ankara, Turkey – Thousands have gathered to mourn the death of the at least 95 people killed in bomb blasts at a peace rally in the Turkish capital Ankara.

Mourners – mainly leftists, unionists and pro-Kurdish activists – were overwhelmed with grief and still shocked at the attacks.

The government says Kurdish rebels or ISIL fighters were responsible, but there have been accusations that President Recep Tayyip Erdogan is intensifying a crackdown on Kurdish groups ahead of elections in November.

Demonstrations held in Ankara and Kurdish city of Diyarbakir, condemning attack that killed at least 97 people. 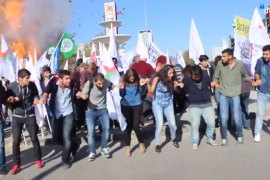